Trust the Focus by Megan Erickson 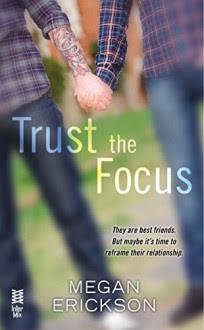 With his college graduation gown expertly pitched into the trash, Justin Akron is ready for the road trip he planned with his best friend Landry— and ready for one last summer of escape from his mother’s controlling grip. Climbing into the Winnebago his father left him, they set out across America in search of the sites his father had captured through the lens of his Nikon.

As an aspiring photographer, Justin can think of no better way to honor his father’s memory than to scatter his ashes at the sites he held sacred. And there’s no one Justin would rather share the experience with more than Landry.

But Justin knows he can’t escape forever. Eventually he’ll have to return home and join his mother’s Senate campaign. Nor can he escape the truth of who he is, and the fact that he’s in love with his out-and-proud travel companion.

Admitting what he wants could hurt his mother’s conservative political career. But with every click of his shutter and every sprinkle of ash, Justin can’t resist Landry’s pull. And when the truth comes into focus, neither is prepared for the secrets the other is hiding.

Buy Trust the Focus now before the sale ends!


Exciting news! Trust the Focus is on sale for 99c on all retailers for a limited time. So if you've been waiting to read it, now's your chance to grab it up!