Landon can’t believe he’s let himself get roped into participating in a charity calendar, let alone one that features tastefully photographed nudes. The genius physicist is hardly model material and he’s dreading the nude part of the photoshoot. Amid his reluctance, the one bright spot is his emails back and forth with the photographer.
However, Bailey ends up being not quite what Landon expects, and their first meeting is decidedly awkward. Bailey’s persistent though, and gradually Landon warms to the burly photographer, and they discover they have a shared love of gamer culture.
A tentative friendship is born, but the road from friends to lovers isn’t easy. Landon’s battling past trauma and must decide how much of a risk he’s willing to take. A sexy connection may not be enough to keep them together unless both are willing to put their hearts on the line.
Approximately 40,000 words. Previously released as part of the EXPOSED anthology, and loosely linked to the #Gaymers universe, this friends-to-lovers, hurt/comfort story stands alone with a guaranteed happy ending. Contains a brief mention of a prior assault, but no on-screen violence or flashbacks. 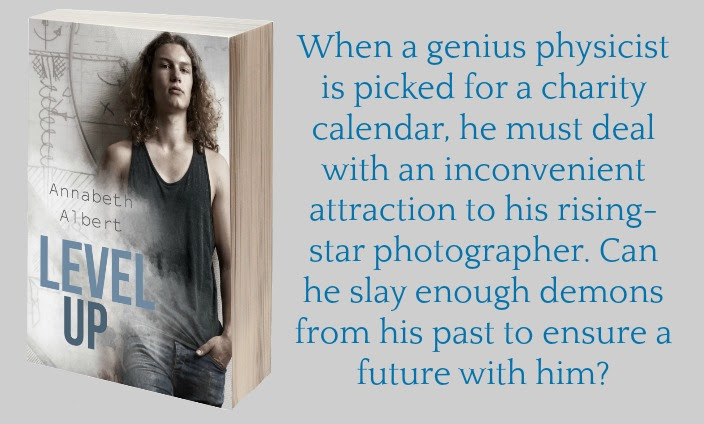 Level Up by Annabeth Albert
My rating: 3 of 5 stars

Landon absolutely did not want to do this calendar shoot. If the photographer had not known how to coax him out of his shell, it could have been a disaster. Afterwards, he realizes he is attracted to the quiet photographer and wants to spend more time with him.

Bailey is immediately attracted to Landon. He appreciated the qualities that make him the shy almost recluse of a professor that he is. After spending time gaming together - they realize this could be worth a shot. Now if they can just put past pain and hurt behind them.

I felt like these characters were a great mix. I loved the reference to the amazing Gaymers series also! This story unfolds at a rather steady pace. The heat is obvious, but the solution is not. As always, this author brings us a book that makes us smile. Even after the storm.

***This ARC copy was given in exchange for an honest review.

Annabeth Albert grew up sneaking romance novels under the bed covers. Now, she devours all subgenres of romance out in the open—no flashlights required! When she’s not adding to her keeper shelf, she’s a multi-published Pacific Northwest romance writer. The #OutOfUniform series joins her critically acclaimed and fan-favorite LGBTQ romance #Gaymers, #PortlandHeat and #PerfectHarmony series. To find out what she’s working on next and other fun extras, check out her website: www.annabethalbert.com or connect with Annabeth on Twitter, Facebook, Instagram, and Spotify! Also, be sure to sign up for her newsletter for free ficlets, bonus reads, and contests. The fan group, Annabeth’s Angels, on Facebook is also a great place for bonus content and exclusive contests.
Emotionally complex, sexy, and funny stories are her favorites both to read and to write. Annabeth loves finding happy endings for a variety of pairings and is a passionate gay rights supporter. In between searching out dark heroes to redeem, she works a rewarding day job and wrangles two active children.