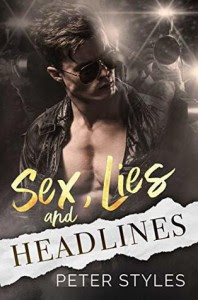 Simon had one night with the man of his dreams.  Knowing he will never see him again, he tried the number given only to find it fake.  Jokes on both of us, what we felt was real.
Luke has thought of nothing else in the six years since he had Simon all to himself.  He is saddened by the fact Simon never called him.  Living a life in the public eye, he feels lonely and that he can never trust anyone completely.
This story was very gripping.  A tale of two souls who should have been together and lost so much time.  I was seriously caught right away and had to know the end.  I give this a 4/5 Kitty's Paws UP!
actor celebrity contemporary journalist KU mm MM Romance peter styles peterstyles review sex lies and headlines sexliesandheadlines