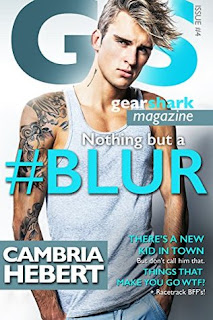 This book is # 4, in the Gearshark series.  This book can be read as a standalone novel.  For reader understanding, and to avoid spoilers, I recommend reading this amazing series in order.

Dylan AKA Arrow has had nothing but heartache until recently.  Now he has to make a decision about his future.  He does not want to bring in more pain to those he loves, so he has put off stating his own wants.
Jason AKA Hopper is attracted to Arrow.  Everytime they are in the same room, it hums with electricity.  Before they get burned, can they choose to make a future?
This was a  bittersweet story.  So much pain.  So many things broken.  Well written, and full of sparks flying.  I loved the honesty of the characters and how they sync so well.  This is really a great addition to the Gearshark series.  I give this book a 3/5 Kitty's Paws UP!
#blur blur cambria hebert cambria hebert books llc contemporary gearshark mm MM Romance racer racing review series