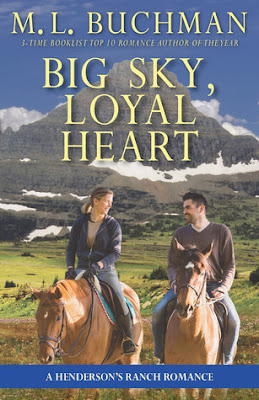 This is book # 5, in the Henderson's Ranch series.  This book can be read as a standalone novel.  While entertaining, the whole make up of the story and characters will make more sense if read in order with the Nightstalkers series as well.
Patrick is learning he loves to be a cowboy.  He had planned to make films, but the best laid plans tend to go awry.  He loves his current job and location.  Now he is falling for someone who may not need him and may not stay.
Lauren is having to adjust being former military.  After disaster struck, she is brought to the ranch to meet some familiar characters.  (Mark & Emily)  We learn that while she is trying to adjust to civilian life just days after discharge.... there may be more options than she is aware of.  Falling for a cowboy was not in the plans but - plans change.
This was such a great read!  I loved having my favorite and familiar characters here.  It felt like home.  I was so pleased to see how some of them were doing after the Night Stalkers series.  This series is great on its own, and has some stellar characters to love also.  I give this book a 4/5 Kitty's Paws UP!
***I received a free copy of this title from the publisher in exchange for an honest review.
ARC big sky loyal heart buchmanbookworks contemporary Delta Force hendersons ranch military ML Buchman montana new release review romance series US Army