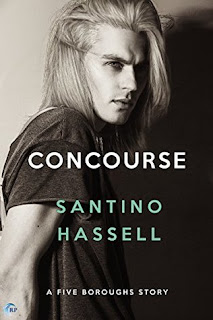 This is book #5 in the Five Boroughs series.  This book can be read as a standalone novel.  For read understanding, and to avoid spoilers, I recommend reading this compelling series in order.
Valdrin AKA Val is Ashton's best friend since childhood.  Val is finding he has sincere feelings for his favorite guy, but he is constantly forced to be in a parental role with him.  He thinks he should try to separate himself from the equation, but Ashton won't let him go easily.
Ashton has knows he has been in love with Val since gradeschool.  His family welcomed him more than his own.  Now there relationship is in confused tatters.  Is it possible to get back in sync?  Should he take a chance and admit how he feels?
This series is so intense.  Each book with such an amazing story of its own.  I loved these characters right from the get go.  They want the same thing, just have to work it out somehow.  Cameo's by favorites from past books make this a must read!  I give this story a 3/5 Kitty's Paws UP!
celebrity concourse contemporary fighter five boroughs MM Romance new york review santino hassell series