Josh Sheehan is unlucky in love and now… newly unemployed. He’s not sure what to do next, but he’s sure he should give up on romance. Especially after last time. His friends warned him that falling for the hunky Irishman was a bad idea. Josh can’t help feeling torn even though he knows it’s best to move on. But when an unexpected dose of family drama blindsides him, Josh finds himself leaning on the one man he’s supposed to forget.
Finn Gallagher is driven by success. He makes no secret that building a name for his tech company is his number one goal. Finn left home a decade ago with a ton of regret, a heavy heart, and a vow to never repeat the same mistake twice. However, there is something undeniably appealing about the self-deprecating man with the silly sense of humor that makes it difficult for Finn to remember why falling for Josh is a bad idea. It soon becomes clear they’re both in deeper than they intended. There is no way to remain untouched. And there is so much to gain, if they’re brave enough to lean in.

Finn smiled and fell into step beside me. It seemed quieter on the street than it was earlier; there wasn’t as much foot traffic. Typical for midweek, I supposed. I breathed in the refreshing night air, loving the faint smell of the ocean. I shivered and crossed my arms. So much for enjoying a leisurely stroll. It was cold as fuck out here. I picked up my pace, but Finn pulled at my elbow to stop me.
“Are you daft? Where’s your coat?”
“I f-forgot it at the last bar. It’s okay. I’m cl-close.” I visibly shook when the wind whipped up the sidewalk, sending a scrap of newspaper flying by us like a paper airplane.
“Let’s go back and get it.”
“No, my friend will give it to me later. Or her friend will. I’m almost h-home so—what are you doing?”
“Put this on, then.”
Finn shrugged his suit coat off and set it over my shoulders like a cape or a cloak. He was two inches taller than me and far more muscular. It was like being wrapped in his warm, cologne-scented embrace. The gesture was so chivalrous, it left me speechless for a moment. I knew he was just being kind, but I couldn’t contain my smile.
“Thank you,” I said. “Are you sure you won’t be too cold?”
“Where I’m from, this is a summer breeze. You need it more than I do. Now tell me about your mates. I’m relieved to know you weren’t out drowning your sorrows on your own tonight.”
I snickered at his paternal tone. “I’m not above it, that’s for sure, but no…I was with my work crew for one last happy hour. Marley insisted. She was the redhead with the awesome curls I was with this morning at the museum.”
“I remember. She’s the one holding your jacket for ransom, eh?”
“Yeah. She’s on a mission to find the perfect man for me,” I huffed, making sure he saw my eye roll before we turned the corner to my street.
“Has she ruled out women? You’re bi, aren’t you?”
“Honestly, I don’t know what I am anymore. I had girlfriends in high school and even in college but after the first time I was with a man, I haven’t been interested in anything but dick.”
Finn laughed. “Good to know.”
“What about you?” I asked, leading him down a brick path and up a short flight of stairs.
I leaned against the bright red door as I fumbled for the house key in my front pocket. In my head, I was planning a cinematic-worthy good-bye. Something lighthearted but sincere before we parted for the last time. It would have been a helluva lot easier to concentrate if he wasn’t standing so close and looking at me like I was the last brownie on the buffet table. I cocked my head and waited for him to break the spell.
“I like it too,” he said in a husky voice I hadn’t heard in far too long.
I gulped and licked my bottom lip as he moved in, bending slightly to brush his nose against mine. He surrounded me in every possible way. The heat of his body and the warmth of his coat draped me in a seductive cocoon. I felt woozy with a rush of desire so intense, I would’ve swayed on my feet if he hadn’t been standing so close. I set my right hand on his hip to steady myself and leaned in…just as he pushed away.
Finn let out a ragged breath and swiped his hand over his stubbled chin. “Fuck. I forgot how bloody difficult it is to walk away from you.”
“Then don’t.”

Leaning Into Touch by Lane Hayes
My rating: 3 of 5 stars

This book is technically the 4th book in the series, though it is labeled as book #3 in the Leaning Into Stories series. This book can be read as a standalone novel. To avoid spoilers and have a greater understanding of the series, I recommend reading these books in order.

Josh is unsure what he wants to do with his future, now that his current job is complete. He is trying to work this out as he runs into an ex that he has never really gotten over. Can he trust his feelings to try again with Finn, even though he is a mess about the rest of his life?

Finn never wanted to say goodbye in the past to Josh. Running into him repeatedly lately feels like fate taking a hand. Can he convince the skittish man to give him another chance?

This story just stole my heart. These characters so obviously belong together. I loved the very real heartache they expressed. I also felt the heat with the sexy times. Really good read and addition to the series.


***This copy was given in exchange for an honest review only. 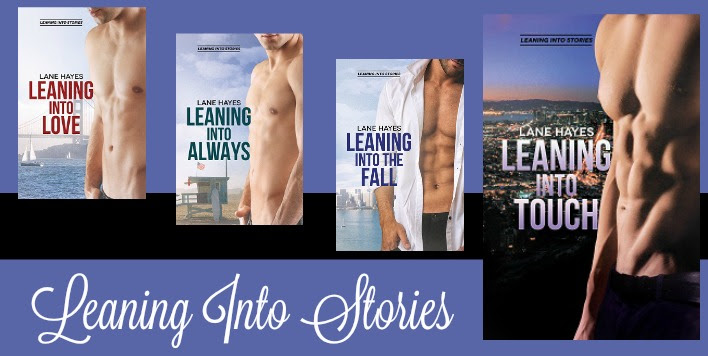 Lane Hayes is grateful to finally be doing what she loves best. Writing full-time! It’s no secret Lane loves a good romance novel. An avid reader from an early age, she has always been drawn to well-told love story with beautifully written characters. These days she prefers the leading roles to both be men. Lane discovered the M/M genre a few years ago and was instantly hooked. Her debut novel was a 2013 Rainbow Award finalist and subsequent books have received Honorable Mentions, and were winners in the 2016 Rainbow Awards. She loves red wine, chocolate and travel (in no particular order). Lane lives in Southern California with her amazing husband in a newly empty nest.